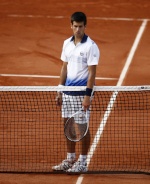 THE MODERATOR: Questions, please.
Q. How do you feel today? You felt good?
NOVAK
DJOKOVIC: Yeah, I felt good on the court. I think most of my
first-round matches this year I haven't got, you know, the right
rhythm. But today I was pretty happy with the way I started this
tournament.

Q. Any reason why your first-round matches have been awkward for you?
NOVAK
DJOKOVIC: Obviously I wasn't focused enough, and today I played the
right game. I was really -- every single game I played I want to give
my best, and I think I was -- the concentration was quite important key
today.

Q. How is the experience to have the ATP tournament in your country?
NOVAK
DJOKOVIC: Well, it's a new experience for me and my family and
everybody, I think, in Serbia. I think never had an ATP event in my
country, so we look forward to that.
We have a lot of interest in
sponsors and tennis fans around Serbia, and it's already being
announced. Everybody is waiting to have a ticket and come to see the
tennis stars.
It's the first year, so we're excited. We're going to try to make a great impression on the tennis world.

Q. The ATP is very happy about it as well.
NOVAK DJOKOVIC: Yeah, of course.

Q.
So now are you going to have to do something more than play? Like are
they going to make you clean up and fix things and organize?
NOVAK DJOKOVIC: For me I think it's a challenge. It's excitement in one way, because I'm a player and this is my job, my life.
I've
been involved in the players' council, so I'm really trying,
organization-wise, to do some things and to be a part of innovations,
let's say.
So being directly a part of the organization of the event
is quite important for my tournament, I think. And because there are
certain details on the tournament that I can help out, you know, the
organization.
From the perspective of the player, it's exciting. So I look forward to it.

Q. Are you prepared, though? Like some players might come to you and go, Novak, there's not enough water, or Novak...
NOVAK
DJOKOVIC: No, I'm not going to clean off the court, for sure. No, they
gave me three instead of four balls for practice and things like that.
Well,
you know it might be. It was funny, because I was not -- you know, not
literally negotiating with the players to come to the tournament, but I
was just talking it through so they can think about some of the top
players.
I know it's not actually easy week, because you have the
2000 events, Rome and Madrid, and we're in between. Most of the top
players will probably not come because they want to focus themselves at
major events.
We have a 28 draw, which a great thing. It'll help our
tournament to survive. Hopefully we going save some wild cards for the
top players if they want to come.

Q. Have you convinced anyone special yet?
NOVAK
DJOKOVIC: Couple players. I don't know if you seen, but Stepanek and
Croats, like Ljubicic and Karlovic and players like Cañas. So we going
to have a decent first year. visit our archives at asapsports.com

Q. Do you have an actual title at the event? Obviously not director.
NOVAK DJOKOVIC: Serbia Open, right?

Q. If you could be a super hero, which one would you be and why? What kind of super power would you like to have?
NOVAK
DJOKOVIC: Well, I think it's unrealistic to look in that way. I wasn't
really into that too much. I probably like to be invisible. Just sneak
into the girls' locker room. That's one of the super powers.Q. Why did you change the racquet brand this year?
NOVAK
DJOKOVIC: Well, I already played for a couple of years in my junior
years, so I just basically went back to the old brand. So it wasn't
really a -- it was a big change, a big responsibility for me, and quite
risky in this period to change the most important tool in our sport.
But, look, I look forward to it. The guys did a good job, so I'm happy.

Q.
Stepanek, he's not getting paid for it, but he plays with a racquet
that's basically manufactured for him. Have you asked him about that at
all?
NOVAK DJOKOVIC: No. The only thing I know about him is that he played with my racquets his first match in Masters Cup.